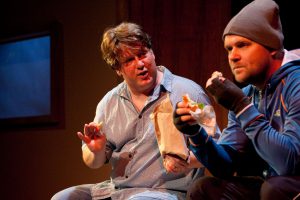 What do you do when your marriage breaks down, your job vanishes, your investment turns into debt and your team can’t get off the bottom of the league? What else can you do but rely on the old friendships, smoke a good cigar and play the beautiful game. Four life-long friends dance their way through a season of relegation battles, marital disharmony and global economic collapse.

A tale of friendship, football and financial insolvency.

First performed as part of the 2009 Absolut Dublin Fringe Festival. It opened at the Axis Ballymun, and subsequently played at The Project Arts Centre and The Civic Theatre Tallaght. Produced by Gúna Nua theatre in association with Axis Ballymun. 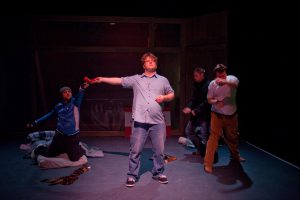 Funded by The Arts Council and Dublin City Council.