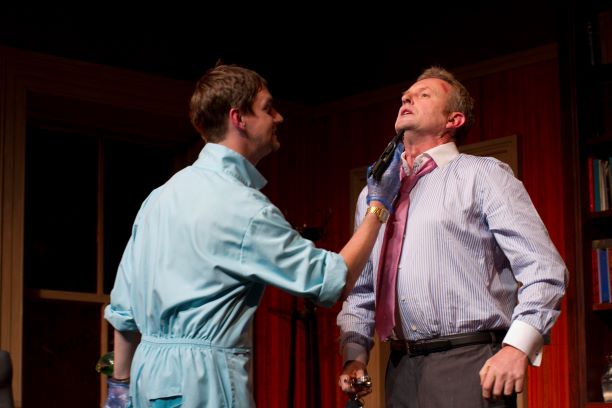 Robert’s had a long day at the office he’s been watching the clock for the last hour. He’s winding up on his last phone call of the day when Ray, the cleaner, shows up. But it’s the wrong day for Ray to clean the office.

Ray has a lot of things on his mind but letting Robert go home isn’t one of them. He’s got a whole evening planned, including party games and special surprise guests. Before two hours have elapsed both men will understand how their pasts and futures are horribly intertwined, and no one who enters that office will think, or feel or be the same person again. ‘Because tonight…TONIGHT’S GOIN’ TO BE ABOUT DIAMONDS.’

Chicane is packed with suspense, action and deceit; a diamond edged thriller that treads a tightrope of revenge and redemption; a who-done-it with surprises lurking around every corner, a darkly comic, multi-faceted, tale of of love and loyalty.

A Civic Theatre/Gúna Nua Production in Association with Draíocht Arts Centre, The Everyman Palace, and The Belltable Arts Centre.